Turmeric Benefits.  This root is worth to adding into your daily juice and smoothie routine- here's why.

In case you’re not familiar with turmeric, it’s a root that’s related to ginger.  Turmeric has a mild fragrance and a peppery, bitter, slightly “hot” flavor.

Actually, you probably are on speaking terms with turmeric, although you might not realize it.  Besides being the ingredient that gives ordinary mustard its bright yellow color, turmeric is used to make curry.  Some people call it “Indian saffron” because of the root’s deep orange flesh.  And its Chinese name means "yellow ginger." 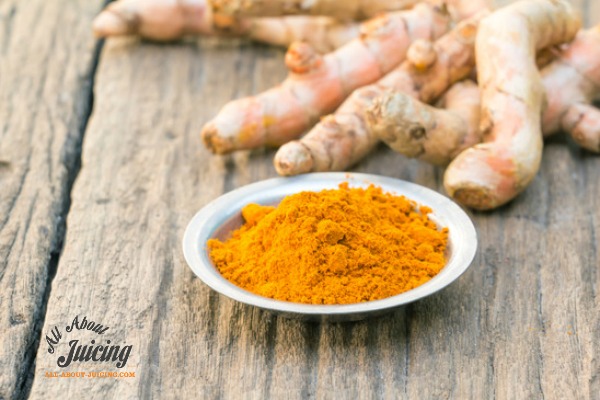 The turmeric benefits on your health

Besides being used to lend color and flavor to condiments, turmeric root has long been known to have several useful medicinal properties which is why you've been hearing about turmeric benefits so much lately. In fact, it’s been used in traditional East Asian medicine (especially in India and China) for countless centuries.  Among other conditions, turmeric has been used in these regions to treat toothaches, jaundice, bruising and bleeding, bloody urine, menstrual issues, colic, chest pain and flatulence.

Multiple research studies have shown that curcumin’s anti-inflammatory properties compare favorably to those of ibuprofen, phenylbutazone and hydrocortisone.  Each of those commonly used medications has been associated with a host of adverse side effects, including gastrointestinal bleeding and ulceration, but that’s not a concern even after ingestion of large doses of curcumin.

Animal studies suggest that turmeric’s curcumin could be used as an effective but safe and cheap treatment for inflammatory bowel disease, including ulcerative colitis and Crohn’s disease.

Moreover, because it combines powerful antioxidant properties with its anti-inflammatory activity, the curcumin in turmeric might also provide relief for people suffering from rheumatoid arthritis. Circulating free radicals are responsible for much of the inflammation and joint damage that occur with arthritis, but antioxidants like curcumin help neutralize them.  Studies report reduced swelling and improved mobility in rheumatoid arthritis patients who are on a regimen of turmeric.

Preliminary research suggests that curcumin’s antioxidant activity might also help deter certain types of cancer, including the formation, proliferation and metastasis of cancers of the breast, lung, prostate and colon.  Besides causing joint issues, the free radicals which antioxidants attack can damage cellular DNA, which sometimes leads to the formation of cancer cells.  Curcumin has also been shown to improve the liver’s detoxification function.  This, in turn, might help the body destroy cancer cells before they have a chance to spread throughout the body.  All of the above suggest that curcumin might have anti-carcinogenic properties.

One study from 2006 assessed the likelihood that people with an inherited form of intestinal polyps would eventually develop colorectal cancer.  The researchers reported that regular consumption of liberal amounts of curcumin and quercetin (an antioxidant flavonoid present in onions, green tea and red wine) significantly reduced the size and number of precancerous intestinal lesions that the subjects eventually developed.  Fewer and smaller precancerous lesions may mean a lower risk of developing colorectal cancer.

Animal research suggests that turmeric benefits may help deter the development and/or spread of prostate cancer, at least when combined with a diet rich in cruciferous vegetables like cabbage, broccoli, cauliflower, Brussels sprouts and kale.  More research is needed to establish whether curcumin could help protect us from colorectal and prostate cancer.

The risk of developing childhood leukemia might also be reduced by following a diet that’s regularly spiced with turmeric.  Although it’s thought that turmeric may help mitigate the adverse effects of exposure to certain environmental conditions which are known to be risk factors for childhood leukemia, more research is needed.

Turmeric may also provide some protection for the cardiovascular system.  The curcumin in turmeric might lower blood cholesterol levels and be able to slow or prevent the oxidation of cholesterol in the blood (oxidized cholesterol is the type that leads to plaque buildup on vessel walls, thereby promoting atherosclerosis, stroke and heart attack).  Moreover, the vitamin B6 in turmeric helps prevent high levels of homocysteine in the blood.  Excessive homocysteine can also lead to plaque buildup, atherosclerosis and heart disease.

Some animal studies suggest that turmeric’s curcumin might have some benefits for cystic fibrosis patients, although this is speculative and verification would be many years down the road.  In theory, curcumin corrects a gene-based protein malformation which leads to the excessively thick mucus which is a hallmark of the disease.  Significantly more research is needed to verify this potential benefit and whether adding turmeric to the diet would be safe for cystic fibrosis patients.

A growing body of research suggests that turmeric might also help slow the onset and progression of certain neurodegenerative diseases, including Alzheimer’s disease and multiple sclerosis.

I firmly believe that it helps these conditions from what I've witnessed and seen, however, more research is needed.

Adding turmeric to your juice and smoothies

It's super simple to add turmeric to your juices or blended drinks.  I do it almost every day (and especially if I feel a headache coming on....)

You might be tempted to add curry powder to the produce you’re juicing (after all, turmeric is an ingredient of curry), but you’ll need to use turmeric itself to get useful amounts of curcumin in your diet.  Curry powder actually contains very little curcurmin.

Fresh turmeric roots: Start with a fresh turmeric root if you can.  If your supermarket doesn’t carry them, try an ethnic or organic food store.  Use it as quickly as you can because the roots tend to get moldy fairly fast.  Peel off the root’s tough outer skin before adding it into the produce you’re using to make juice.  When juicing, just feed it into your juicer along with the rest of your produce. For smoothies, add a small chunk to your blender with your other ingredients.  Chopping it finely will help it process better.

Turmeric powder:  If you can’t find fresh roots or you just don’t want to mess with them, you can add organic turmeric powder to the produce you juice.  Pure turmeric powder offers a high concentration of curcumin.
You could also make fresh turmeric powder by boiling the root, drying it and then grinding it until you have a fine powder (but heating the root will destroy some nutrients).  If you are making juice with your juicer, add about 1/4 tsp or 1 tsp to your glass of juice and mix just before drinking.  If you are adding it to your smoothie, you can add more than 1 tsp without it tasting too strong.  But remember, turmeric is potent so less is more.

Storing turmeric: Fresh turmeric root should be stored in your refrigerator (again, use it as soon as you can).  Turmeric powder should be kept in an airtight container and stored somewhere that’s cool, dark and dry.

Other ways to use turmeric

A lot of people take it as a pill supplement, and I have some around just-in-case.  You can make juice shots by mixing it with lemon, carrot or coconut milk for a healing tonic.  And most commonly, turmeric is used in cooking stir-frys, seafood dishes, soups, curries and more.  Try experimenting with this healing herb, you might really like it and find turmeric benefits a great addition in your own life.