Washing Produce for Juicing | The Best Way to Wash Produce

Washing produce for juicing isn't really fun, but it's something we have to do.  For someone who juices often like me, there’s a preponderance of fruit and vegetables that needs washing each week! Fortunately I’ve come up with a several ways of washing my produce before juicing that ensures I minimize the impact of any bacteria or pesticides that may be lurking undetected on the surface of my juicing ingredients. And yes, I’m going to share it with you!

But first, why wash produce at all?

We all know fruit and vegetable are good for you, but often they come covered in pesticides, wax and bacteria, which can mitigate their goodness! The total impact of pesticides on the human body is not known, but the Environmental Protection Agency (EPA) states that pesticides can cause cancer, birth defects, nerve damage and other problems that may occur over a long period of time.

There’s also a strong argument for washing produce, whether organic or not, to avoid bacteria and food-borne pathogens that may cause you to become ill. 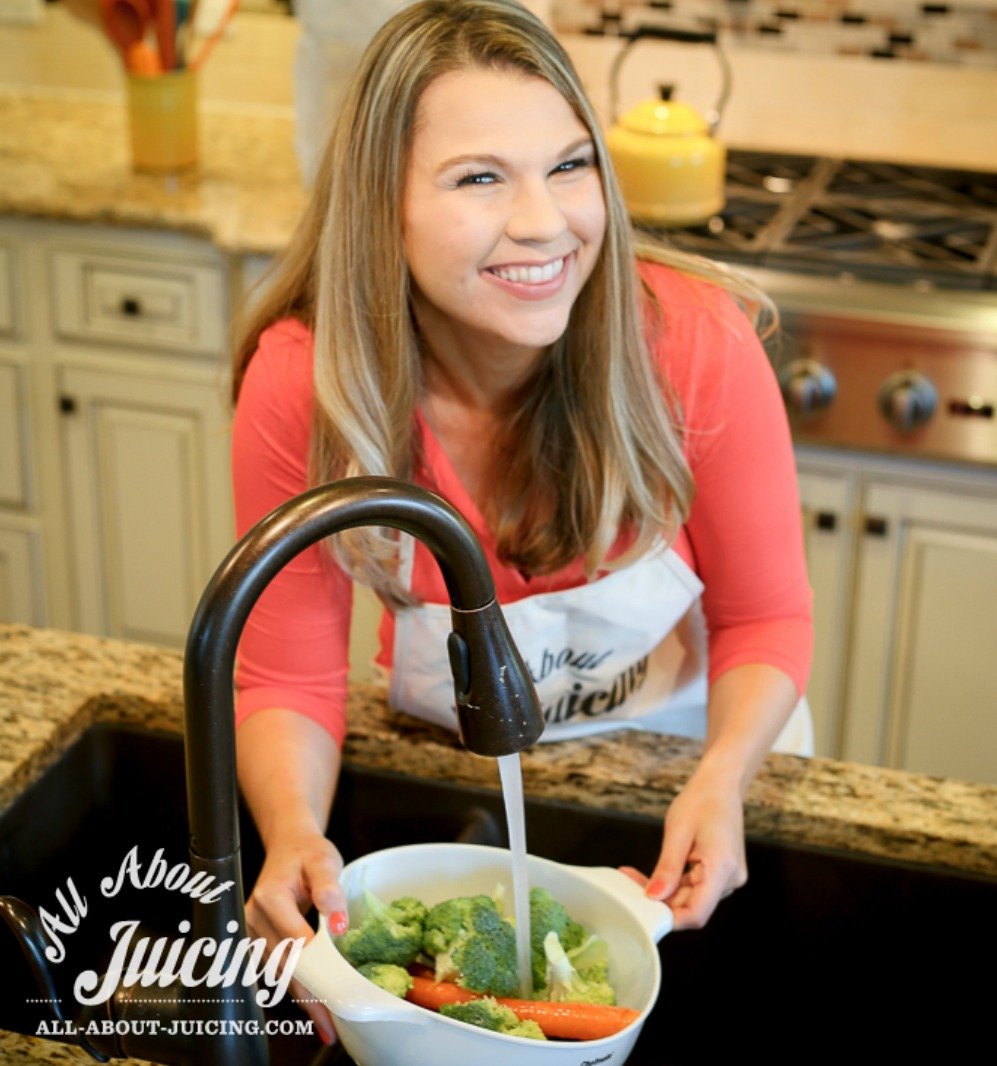 Tips on washing produce for juicing

Here are some of my top tips on the best way you can start washing produce for juicing to get rid of those pesky pesticide residues, bacteria, and wax.

Generally I store my fruit and vegetables until I’m ready to use them! Washing before storage can actually promote growth of bacteria and cause your food to spoil faster. So rather wait till you’re ready to juice before washing.

You can also trim the top and outer sections of leafy vegetables to get rid of pesticides and bacteria on the outside, while vegetables such as cucumbers, beets, carrots can be peeled if not organic.

Certain vegetables, especially cruciferous vegetables such as cauliflower, broccoli or brussel sprouts, can be blanched if you can’t clean between their florets properly. Stick them in hot water for 10 seconds to disinfect them quickly before juicing them.

I like to use a firm scrub brush to wash off wax and bacteria from veggies like carrots, potatoes, turnips, apples and cucumbers. If it’s not organic, I might even peel off the skin.

Some soft fruit like berries is best soaked and rinsed in fresh water. You can place in a colander and repeat till you feel you’ve got off the worst! You can also buy a professional fruit and veggie washer if you want to take it to the next level.

There’s numerous ways to make your own veggie wash. Vinegar helps kill bacteria and viruses and break down wax.  You can add half a cup of vinegar to every cup of water for a quick and easy vegetable wash that works brilliantly with leafy greens and other fruit and vegetables.

Try making your own with lemon (1tbsp), baking soda (2 tbsp) and water (1 cup), which is great for removing wax (you can wash your produce in this or simply spray it and let sit for 5-10 minutes before rinsing off). A spray of vinegar and hydrogen peroxide is also a great, non-toxic veggie cleaner. Simply fill a spray bottle of vinegar and another spray bottle of 3% hydrogen peroxide. Spray produce with one, then the other and rinse with water. It’s proven to kill virtually all bacteria on heavily contaminated food and surfaces when used in this fashion, making this spray combination more effective at killing these potentially lethal bacteria than chlorine bleach or any commercially available kitchen cleaner.

These are a quick and easy solution if you don’t have time on your hands, but be sure to look at the ingredients to avoid any harmful chemicals, as this will defeat the purpose of washing your veggies in the first place! However, be aware that vinegar and water works just as well and is a lot cheaper.

When washing your fruit or veg, always make sure you rub the produce back and forth with your hands to apply friction. Do this for at least 30 seconds and you’ll get most of the pesticide residues off.

That’s it, a whole bunch of ways of washing produce for juicing!  I generally try and eat organic and at least avoid the Dirty Dozen, which are the 12 products with the highest pesticide residues. Brought to you by the Environmental Working Group, these products are best bought organic, while the Clean 15 are commercially-grown products that are least contaminated.  You can access this list here at www.ewg.org


Lovin' this juicy info? Leave a comment in the box below 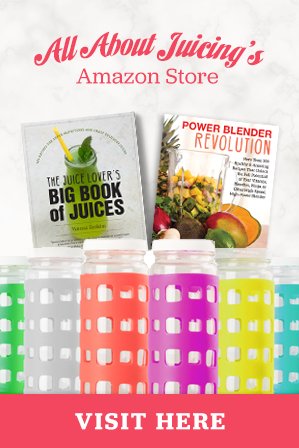 COPYRIGHT © 2010-2020 BY VANESSA SIMKINS & ALL ABOUT JUICING®, INC. ALL RIGHTS RESERVED. CONTENT PROTECTED BY DMCA. THIS WEBSITE AND IT'S EMAILS ARE NOT INTENDED TO SUBSTITUTE FOR MEDICAL ADVICE AND IT IS NOT A SUBSTITUTE FOR WORKING WITH A DOCTOR OR HEALTH PROFESSIONAL.  WE CANNOT GUARANTEE THE OUTCOME OF FOLLOWING THE RECOMMENDATIONS PROVIDED AND ANY STATEMENTS MADE REGARDING THE POTENTIAL OUTCOME ARE EXPRESSIONS OF OPINION ONLY. CONSULT A PHYSICIAN BEFORE STARTING ANY HEALTH REGIMEN.  TERMS, CONDITIONS, DISCLAIMER.  AMAZON AFFILIATE DISCLAIMER.  PRIVACY POLICY.